SHARE
Hayley Livingston is a sound designer, musician, and sushi enthusiast. She spends her time watching movies, thinking of puns, and begging her cat to be normal. A lover of guitar music, she plays shows around Brooklyn with her best friends/bandmates.

LBB> Who would you say is your creative hero?
Hayley> My creative hero is Gerard Way, the singer and songwriter of My Chemical Romance. He’s also a renowned comic artist and has won the Eisner Award, the highest award you can get in comics. He’s pretty multidisciplinary.


LBB> How long has this person been important to you and what are your first memories of meeting them or coming across their work?
Hayley> I remember the very first moment I heard My Chemical Romance; I was with my mom in the car picking up my sister from a roller skating rink, I’m guessing I was in fifth grade. I heard the song ‘Welcome to the Black Parade’ on the radio, and I was like, “Whoa, this is cool.” I didn’t really know much about music at that point, but I bought one of their music videos on iTunes. Eventually I put on the whole album The Black Parade and it was pretty much hook line and sinker for me. They had me in their grubby little hands.


LBB> If it’s someone you personally know, how did you get to know them and how has your relationship evolved over the years? If you don’t know this person, how did you go about finding to learn more about them and their work?
Hayley> I’m grateful to have grown up in a world of iTunes, it was pretty much at its peak when I got into music. YouTube was also really peaking at the time, so I would also watch tons of videos. I love live versions of songs, because it’s like a version of the song that you haven’t heard before. You start to memorize the little quirks of that particular performance. I had one of their live DVDs and I swear, I know every ad lib.
Their fourth album Danger Days came out when I was the perfect age, and at that point I had started to hear of Gerard Way’s comics. I always wanted to get into comics, so when I found out that my favourite musician was also a comic artist it was a great gateway. They made a comic as a sequel to Danger Days, so they essentially built a whole multimedia world just because Gerard wanted to do it. 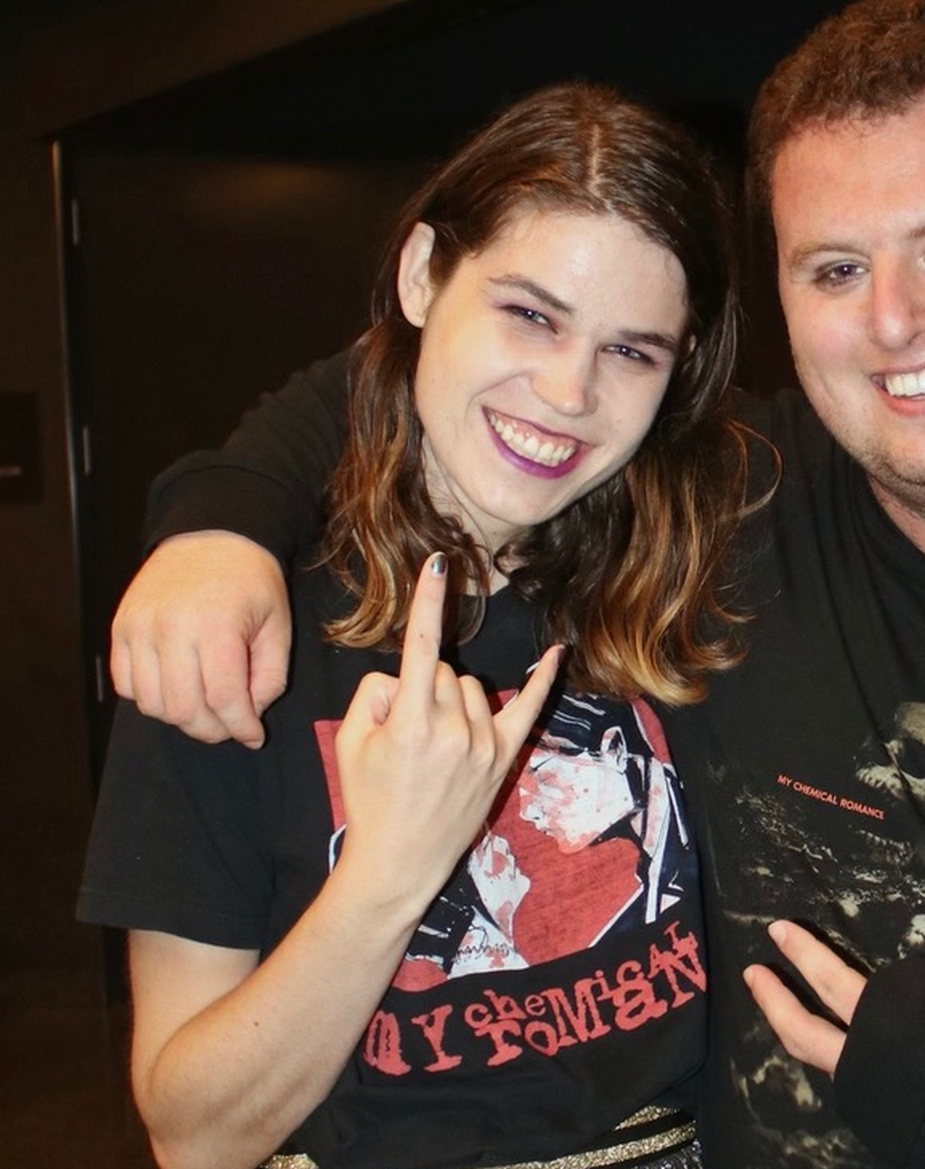 Hayley at an MCR show in September

LBB> Why is the person such an inspiration to you?
Hayley> There are certain messages in My Chemical Romance lyrics that I really like and resonate with a lot of people, particularly teenagers. I think their songs are beautifully written. There’s a certain, like, fearlessness about them; a lot of what they sing about and talk about on stage is not taking sh*t from anyone, not letting anyone push you around. As a teenager those are the things you need to hear. My Chemical Romance was just magnetic, and Gerard was the ringleader of it all. He created the designs for each album, and they’d all have a different art scheme to go with the music. He’s taught me a lot about art and life, and also about music.


LBB> How does this person influence you in your approach to your creative work?
Hayley> When I really started to write music, I was definitely trying to emulate them. They pretty much taught me how to write music; even today there are certain chords in songs where I’m like, “That’s a My Chemical Romance chord, I know exactly where I took that from.” Their stylings have always been a huge influence on me. From a purely musical standpoint, I do think Gerard Way is a sonic genius. He’s kind of the guitarist version of a gearhead; I feel like more often than not, the term gearhead is applied to music producers and synth collectors, but he has a gearhead attitude towards guitar and fuzz pedals, making crunchy, crunchy sounds. He really inspired me to get into that weird stuff.


LBB> What piece or pieces of this person’s work do you keep coming back to and why?
Hayley> I saw them play live four times in September, which really sent me back on a kick. Honestly, all the My Chemical Romance albums, but Gerard Way released a solo album in 2014 called Hesitant Alien. It came out my freshman year of college, and I went to see him in concert at Webster Hall. Again, the way he experiments with sound is really cool. My Chemical Romance has always been loud vocals in the front, but on his solo album he has lots of cool echoes and filters, so I really liked how much of a departure it was from the band’s stuff. And I always come back to his comics, especially his version of Doom Patrol; there’s always something more you notice when rereading. His albums and comics are really layered, and I get more out of them all the time.
Wed, 07 Dec 2022 13:52:00 GMT
v9.7.0

Although he has reached the Beatles’ theoretical age of supposed decrepitude, Wally Gonzalez—yes, two Z’s—is …