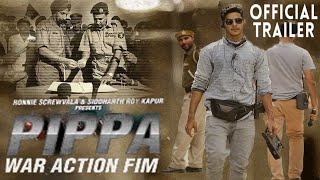 Pippa is an upcoming film that is based on the 1971 Indo-Pak war. Ishaan Khatter, Mrunal Thakur, and Priyanshu Painyuli star in the movie. It was recently announced that the movie will be released on Vijay Diwas, the 50th anniversary of the war that led to the liberation of Bangladesh. The film is a historical drama, which aims to be a tribute to those who served in the Indian Army during that time.

The film is directed by Raja Menon and stars Ishaan Khattar, Mrunal Thakur, Priyanshu Painyuli, and Sonal Razdan. It will be released in Hindi and has an estimated release date of December 2, 2022. It is being produced by RSVP, Siddharth Roy Kapur, and Ronnie Screwvala. Raja Krishna Menon is the director of the film and has previously directed Akshay Kumar’s Airlift.

Pippa is a war drama and is being backed by a star-studded cast, including Ronnie Screwvala and Siddharth Roy Kapur. Raja Krishna Menon also directed Akshay Kumar’s Airlift. The movie has been billed as a tank battle movie and is a hero story about a gallant Indian army officer who fought in the Eastern front during the Indo-Pakistan war in 1971. Ishaan Khattar plays the titular Brigadier Balram Singh Mehta.