From worm charming to toe wrestling, here are some of the most weird world championships – Economic Times

You don’t hear the glockenspiel much in modern music. But Alaska singer-song writer Meg Mackey weaves it, along with acoustic and electric guitar, accordion, banjo and foot stomps onto her new Album ‘Eat Your Heart Out’. KSKA’s Daysha Eaton reports that, although she’ll soon be playing at the ‘World Cafe Live’ in Philadelphia, you can still hear Mackey at small venues around Anchorage.
Anchorage-based singer-song writer Meg Mackey has been making her way around the city’s music venues to showcase her debut album, ‘Eat Your Heart Out’.
Born on the island of Guam, 27-year-old Mackey grew up as a self-described ‘military brat’, spending her early years in San Antonio, Texas, attending African-American and Hispanic church services. And you can hear that influence in songs like ‘Rendered Useless’ a collaboration with the Spenard Street Choir.
In 1991, 7-year-old Mackey moved with her family to Palmer, where she did home school and got into dog mushing. She credits yelling at the dogs with helping build her strong alto vocal chords. And no, as far as she knows, she is not related to Lance Mackey. When she was 14 she picked up a guitar that was laying around the house, but it took her a while to get comfortable with her own voice.
“Didn’t start singing actually until I was 17 or 18. In fact, I actually hated my voice. I was one of those kids who if I’d left a message on an answering machine, I’d be like, ‘turn that crap off’, I don’t want to hear myself you know and it took me a minute to, you know what I mean, to accept my own voice.”
She began writing music and playing around campfires in her early 20’s while she was working in tourism on the Juneau Ice Fields and at a lodge in Wrangell Saint Elias National Park, putting together the songs for what would become her first full-length album. When she was 21, she settled in Juneau. But she says there’s only so many places you can play in a city that size … And Anchorage kept calling her name.
“I had a lot of friends just telling me what was going on here in Anchorage just kinda telling me that the music scene’s kinda building its way up the west coast.”
So, a year ago, she quit her barista job and moved to Anchorage’s Spenard Neighborhood, arguably the epicenter of the city’s growing indie music scene. Now she’s playing music full time. She says she was met with open arms and she hasn’t looked back.
“I mean it’s an amazing place. The venues here treat you so well, I mean, the people here have been just so supportive. Musicians, producers, the people that own the recording studio – Ken Sease’s recording studio at Twisted Penguin.” 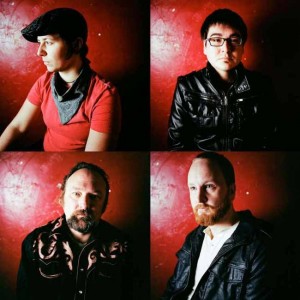 That Spenard studio is where two well-known Anchorage musicians, Even Phillips, the front man for the Whipsaws and James Dommeck Junior, a drummer for the same band,produced Mackey’s Album. Dommek Junior, Martin Severen who is also in Jack River Kings and James Glaves who also plays with Ghost Hands make up the Meg Mackey Band. Mackey’s imaginative, intimate song-writing and raw vocals reach out and grab your heart. And listening, you feel as if you’ve been invited to hang out with her around a campfire to waste some time …
“… drumming, strumming, Why don’t you waste your time with me … by the sea …”
Meg Mackey is set to take her uniquely Alaskan sound to Philadelphia where she’ll play at the ‘World Cafe Live’, in on Wednesday May 9th. Oh, and the song with the glockenspiel, it’s called ‘Tiny’ Toes and she says all her friend’s kids love it.
“Mama’s calling, it’s time to go home. Say goodnight, I’ll miss you so Mr. Ocean. Send me something really cool in the morning. And I’ll be happy that I got to be going but I’ll be seeing you first thing in the morning …”
LINKS:
Download
Daysha Eaton is a contributor with the Alaska Public Radio Network.
Daysha Eaton holds a B.A. from Evergreen State College, and a M.A. from the University of Southern California. Daysha got her start in radio at Seattle public radio stations, KPLU and KUOW. Before coming to KBBI, she was the News Director at KYUK in Bethel. She has also worked as the Southcentral Reporter for KSKA in Anchorage.
Daysha’s work has appeared on NPR’s “Morning Edition” and “All Things Considered”, PRI’s “The World” and “National Native News”. She’s happy to take assignments, and to get news tips, which are best sent via email.
Daysha became a journalist because she believes in the power of storytelling. Stories connect us and they help us make sense of our world. They shed light on injustice and they comfort us in troubled times. She got into public broadcasting because it seems to fulfill the intention of the 4th Estate and to most effectively apply the freedom of the press granted to us through the Constitution. She feels that public radio has a special way of moving people emotionally through sound, taking them to remote places, introducing them to people they would not otherwise meet and compelling them to think about issues they might ordinarily overlook.
Accessibility Tools

By providing an email address. I agree to the Terms of Use and acknowledge that …