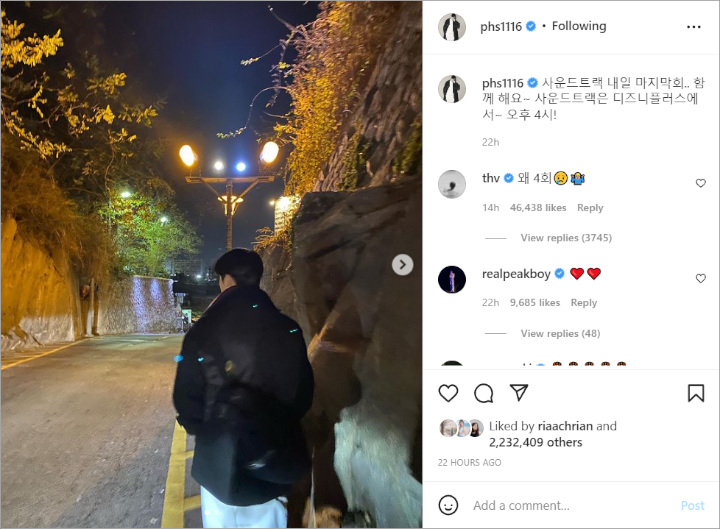 Park Hyungsik Recently Promoted The Last Episode Of The Drama ‘Soundtrack #1’ Which He Starred With Han So Hee. V Left A Comment That Stole Attention.

V BTS ( Bangtan Boys ) kept his promise to watch Park Hyungsik’s drama , ” Soundtrack #1 .” However V has a complaint about the drama.

On April 12, Park Hyung Sik promoted the last episode of the drama “Soundtrack #1” which he co-starred with Han So Hee . “Tomorrow is the last episode. Join, don’t forget to watch it on Disney Plus at 4 (afternoon),” he wrote.

“Soundtrack #1” is a mini-series that only has four episodes. V complained about the too few episodes. “Why only 4 episodes,” protested V including a sad face emoji.

Although the story is quite cliché, namely about the friendzone, “Soundtrack #1” is quite captivating to viewers. Park Hyungsik and Han So Hee’s chemistry is also really good. Many fans, like V, complain about the small number of episodes.

This is not the first time V has commented on Park Hyung Sik’s uploads about his drama. Previously, the 1995-born idol promised to watch this drama when it was promoted by Hyungsik.

Meanwhile, “Soundtrack #1” tells the story of Han Sun Woo (Park Hyung Sik), a rookie photographer who doesn’t talk much, but is also a kind and warm-hearted man.

Han Sun Woo has been close friends with Lee Eun Soo (Han So Hee) for 20 years. Eun Soo herself works as a lyricist for a living. He has an honest and bright personality.

For some reason, Han Sun Woo and Lee Eun Soo started living together in the same house for two weeks. Living together, their relationship develops romantically.

In other news, BTS held the concert “PERMISSION TO DANCE ON STAGE” at Allegiant Stadium, Las Vegas. Their upcoming concert will take place from April 15 to 16. The last day’s concert will be broadcast online.