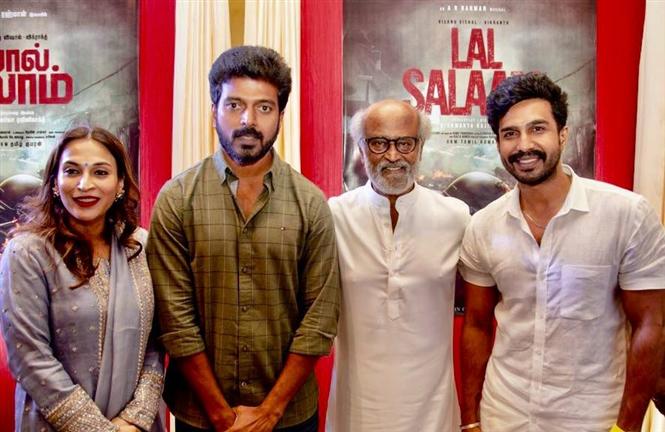 Actor Rajinikanth’s next after Jailer i.e his 170th film appearance is for his daughter Aishwarya’s movie titled Lal Salaam. The movie recently went on floors with a pooja ceremony and has Vishnu Vishal and Vikranth playing lead roles. In an entertainment with E Times, actor Vishnu Vishal has opened up on Rajinikanth’s role and the cricket background in the movie. The actor said,

“It’s (Rajinikanth’s role) is not a cameo, which means appearing in just one or two scenes. As mentioned in the poster, it’s a special appearance. So, it’s a crucial role, and he will definitely be on screen for a significant amount of time,”. Vishnu who is a former cricketer by profession has done a full-fledged cricket based movie titled Jeeva before. However the actor had this to say about Lal Salaam, whose title look poster came with a cricket helmet on fire in it:

“You will not find even a slight similarity with that film (Jeeva). It’s an intense story with lots of emotions. The audience will have the satisfaction of having watched a meaningful film once they see it. I am going to play a sport I always love, and alongside my best friend (Vikranth). Plus, Rajini sir and Rahman sir are going to be part of such a huge project, which is backed by a big production house (Lyca Productions). What more can I ask for?”