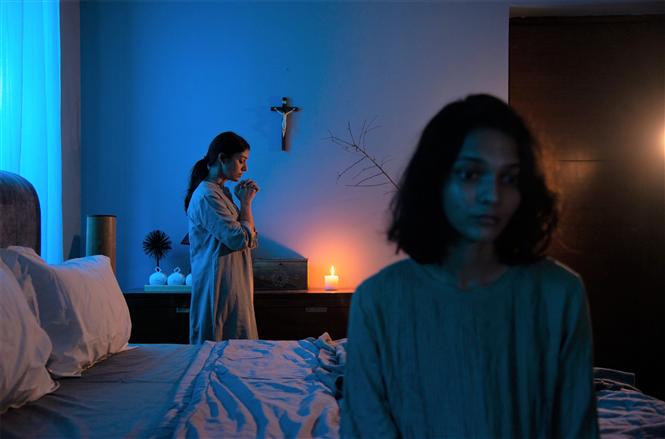 
Connect is a horror-thriller starring Nayanthara in the lead role. The film is directed by Ashwin Saravanan of Maya and Game Over fame.

Premise
Vinay and Nayanthara are the parents of a teenage girl. Vinay passes away due to COVID. The broken girl ends up bringing home a devil by trying to supernaturally communicate with her dad.

Writing/ Direction
The attempt to offer something unique is very much there, but there’s no story. The film is a giant zero in terms of writing, the approach is different but the flow is extremely basic and tiring to see the film following the tried and tested formula of most of the horror movies out there. The ghost’s purpose is never unveiled, nothing exists as a backstory, unfortunately becomes a pointless flick in the final run. It’s fine if the ghost doesn’t have a flashback to explain its presence, the existence is real here and it’s not any kind of cooked up stuff as we saw in Pizza (2012). The thing is there’s no proper justification or closure to make up for the missing details. Direction is good by placing some interesting metaphors at times, but felt there’s no finesse in the filmmaker’s conviction. Being a subject happening during the lockdown, it’s presented only through video calls, there could’ve at least been a tiny voice call sequence to make it more real, and no clue why they decided to cast Anupam Kher but voice him with a dubbing artist for Tamil. There’s one smartly executed unexpected scary moment out of the whole bunch that kept just trying to terrify. But yeah, somehow the film manages to hold to an extent in its first hour with typical horror sequences. Sadly the scenes are so disjoint and the flow is incoherent, the main reason for the strong disconnect and there’s no tension when the family suffers, especially in the last hour.

Performances
The teenage girl (played by Tamil debutante Haniya Nafisa) does a solid job, both with physical strain and creepy facial expressions. Vinay has delivered what’s asked in his extended cameo role. Anupam Kher is fine as a priest, however his efforts are watered down due to the altered dubbing decision. Sathyaraj is a misfit, he somehow doesn’t do justice to his role, he fails to be believable in the scary portions. Nayanthara looks promising as a mother of a teenager, but her character is very weakly portrayed and her performance is also not up to the mark.

Technicalities
The technical department has worked really hard to provide an one of its kind theatrical experience. The film is undoubtedly sound in terms of the music (Prithvi Chandrasekhar), camera work (Manikantan Krishnamachary), sound effects, etc. Haunting background score keeps the curiosity factor alive during the night scenes, and leaves silent at required places. Excellent cinematography, such rich DI and the night shots have come out extremely well, especially the shadow shot at the end is amusingly timed and captured. Editing is abrupt at so many places, the pattern on the whole was messy and didn’t convey what was intended.

Bottomline
A technically rich film with an unique approach style. But the core essence is extremely disappointing as there’s nothing to specify as a story. Also, the happenings are as familiar as it can be for a horror movie.